Digital technology has helped PMC’s monitors go from strength to strength — and now they’re using it in their subwoofers, too!

Few will need an introduction to PMC, the British manufacturers of highly regarded active studio monitoring systems which can be found in a great many mastering rooms, as well as many film and TV dubbing theatres around the world. The company’s larger active systems traditionally employ Bryston amplification and active crossovers, but more recent models have adopted Class–D amplification and digital crossover technology. This innovative technology eventually culminated in the large midfield monitor, the IB2SA, and subsequently in the nearfield TwoTwo range, which we have reviewed previously in the pages of Sound On Sound. 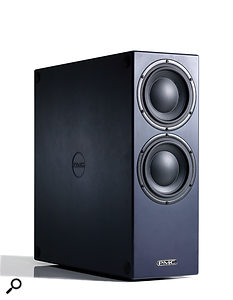 Although one of the benefits of PMC’s unique Advanced Transmission Line (ATL) cabinet technology is a superior low–frequency extension for a given size of box, there are situations that warrant rather greater bass extension and/or power handling — and that’s when a subwoofer comes in handy. To that end, PMC have released two new subwoofer units which are designed to integrate with any of the nearfield monitors in the TwoTwo range.

PMC’s approach to monitor design — and a raison d’être of the ATL philosophy — has always prioritised the minimisation of LF distortion, since unwanted harmonics generated by the bass driver will inherently mask mid–range detail. Needless to say, this same philosophy has been applied to the design of the TwoTwo Subwoofers, which are both ultra–low distortion designs.

Outwardly, the TwoTwo Sub1 and Sub2 appear very similar to the now discontinued active TLE–1S and passive SB100 subwoofer models — at least in terms of form factor and driver complement. These old subwoofers were designed to partner the equally discontinued but still classic LB1, TB2 and DB1 monitors, and the basic engineering design concepts of both models is well proven. However, the detailed internal construction and the electronics of the new TwoTwo subwoofer versions are completely revised and updated, and both are now fully active, digital designs.

In fact, the electronics chassis in both of the TwoTwo subwoofers is identical, with a 400W Class–D power amplifier and a configurable digital crossover system. The difference between the two models essentially comes down to the cabinet size and shape, and the use of different drivers. The Sub1 cabinet measures 200 x 550 x 516 mm (WHD), and weighs a modest 18kg, and it is equipped with a pair of 177mm (seven–inch) drivers. So the Sub1’s form factor is tall, deep, and relatively narrow — not unlike a typical desktop PC cabinet — making it a little more elegant aesthetically, and potentially easier to place in a home studio alongside a desk, perhaps. The base of the Sub1 can be fitted either with a set of small spikes or the almost flat ‘D–cup’ isolator pads, to suit different situations and user preferences.

In contrast, the much stockier Sub2 cabinet measures 630 x 510 x 377 mm and employs a single 250mm (9.8–inch) driver. This is the same custom carbon–fibre Nomex flat–piston design as employed in the IB1 and IB2 monitors. The Sub2’s cabinet profile is clearly a lot wider than the Sub1, but it is also much shallower, making it more appropriate for placement flat against a wall. It’s also considerably heavier than the Sub1 at 40kg. Both designs have the same effective ATL length of three metres, providing identical usable bandwidths of a nominal 22Hz to 200Hz.

All of the connectivity is located at the base of the rear electronics panel, starting with a trio of XLRs accepting left and right balanced analogue inputs, plus an AES3 digital dual–channel input. Each of these inputs also has a corresponding XLR output for onward connection to satellite speakers. In addition, two RJ45 sockets, labelled In and Thru, are provided for a bespoke data–link and digital audio connection via standard Ethernet cables. This can be used to link multiple speakers together, passing both digital audio and commands from an optional remote control unit, if desired. A universal mains power supply is built into the unit (100–240 V AC), with an on–off rocker switch and IEC inlet on the rear panel.

The two analogue inputs are routed to a 24/96kHz delta–sigma A–D converter (with a user–configured low–noise gain–optimisation stage), and the digitised inputs are then passed to the digital signal processor (DSP). It is in this DSP that any required system volume, low–pass filtering, phase–shifting, and room-alignment parametric EQ are performed, along with sophisticated excursion–limiting driver protection. The AES3 (or RJ45) digital input signals are routed through a sample–rate converter (accepting any sample rate from 32 to 192 kHz) before being passed to the DSP at 96kHz. Either channel of the digital input, or a mono sum of both channels, can be selected to drive the subwoofer, catering for both 2.1 and 2.2 systems, for example. 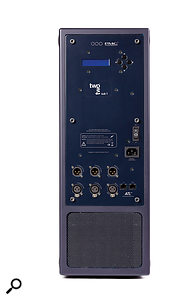 Digital signal processing, as accessed via a menu system on the rear panel, provides all the level and filter options for the Sub1’s extensive array of I/O.

The DSP section generates three separate two–channel outputs. One set is passed directly to the AES3 and RJ45 output connectors, while the second goes via a D–A converter to feed the two analogue outputs. These can be configured to pass fixed or variable level, and full–band or high–pass-filtered, signals. The third set of processed outputs is routed through another D–A converter, and then to the Class–D amplifier powering the subwoofer’s own driver(s).

All system configuration is performed by a backlit LCD display and a set of four cursor buttons at the top of the rear electronics panel. User settings for the subwoofer’s low–pass filter allow 50, 80, 120, 150, or 200 Hz turnover frequencies, plus a filter bypass mode, and 6, 12, or 18 dB/octave slope options. If the subwoofer’s output signals are configured for high–pass filtering, the turnover frequency and slope precisely mirror the selected low–pass settings. The recommended starting point when using a TwoTwo subwoofer with any of the TwoTwo monitors is a turnover frequency of 80Hz.

To help control severe response anomalies in the listening room (such as response dips caused by console or rear–wall reflections), a separate single–band parametric EQ is also provided. The centre–frequency can range between 20 and 150 Hz (in 5Hz increments), and the gain spans (almost) ±8dB. The filter’s bandwidth can also be adjusted between 0.2 and 1.4 octaves (Q between 1 and 8).

I was provided with a pair of TwoTwo5 nearfield monitors and a Sub1 for this review, and hooking the system together was trivially simple. The handbook details myriad ways of interconnecting 2.1, 5.1 and 7.1 speaker arrays, with either analogue or AES3 sources, and the flexibility and versatility of the system’s connectivity is impressive, using balanced analogue, AES3, or PMC’s bespoke RJ45/Ethernet cable system, which also conveys remote control commands.

For convenience, I plugged a digital AES3 input into the Sub1, and then used the subwoofer’s analogue outputs to link the subwoofer to the two TwoTwo6 satellite speakers. After selecting a mono sum signal for the subwoofer, and the analogue inputs on each monitor, I was up and running.

Having connected the speakers and got some sound through the system, the next step was to optimise the subwoofer’s filter settings. I initially set the crossover to 80Hz at 6dB/octave, and then replayed an 80Hz tone to allow the phase to be adjusted, listening for the setting that gave the loudest output at the listening position. Next I adjusted the subwoofer’s level so that it just took over supporting the low end as the satellite speakers started to give up. It’s easy to overcook subwoofer levels, and I always aim for a setting where you only really notice the subwoofer’s (missing) contribution when it’s switched off! I set the subwoofer’s pass–through outputs to be high–pass filtered, reducing the demand for LF from the diminutive satellite monitors.

Navigating the TwoTwo menu structure is quite logical and straightforward, starting with options to introduce the +10dB gain lift mandated in the Dolby Digital specification, and to adjust the phase (0–180 degrees, plus a polarity inversion). The next options are for activating and adjusting the parametric EQ, and to alter the display’s backlight time-out duration. Facilities to adjust the analogue input sensitivity and to trim the digital signal level come next, followed by the input source and (digital) channel selection. Next up are options for fixed or variable levels, and full–range or high–pass filtering for the analogue and digital pass–through outputs. The last important menu options cover the subwoofer’s low–pass filter turnover frequencies and slopes. Pressing the up and down buttons together for more than two seconds resets everything to the factory defaults, and the default configuration display always lists the current system volume level and the filter/slope settings.

I am quite wary of subwoofers generally, and especially so in small, untreated rooms, where I fear they often do far more harm than good... Having said that, I do use a TLE–1S with my legacy TB2 and DB1 monitors on occasion. When setting up the TwoTwo system, I found the enhanced configuration options in the TwoTwo Sub1 allowed much more precise and seamless integration than is possible with its all–analogue forebear, and I suspect the ability to adjust the filter slopes played a significant part in that, helping to define a more precisely controlled transition between the subwoofer and satellites.

Running the 2.1 TwoTwo system alongside my trusty three–way reference IB1 monitors, I was very impressed with the overall integration, and the TwoTwo system sounded very close to a conventional three–way system, rather than a typical 2.1 array. Quality–wise, I have absolutely no complaints. The Sub1 clearly has very low distortion, as switching it on and off didn’t change my perception of mid–range detail at all, it just gently supported or diminished the lowest octaves — which is precisely as it should be.

With the Sub1 working in concert with the diminutive TwoTwo5 monitors, this 2.1 configuration delivered a stunning full–bandwidth performance, which was surprisingly capable and easily on a par in most respects with my Bryston–powered three–way IB1 monsters! As subwoofers go, the Sub1 (and, by extension, the Sub2 as well) is an excellent design with a performance and versatility that certainly justifies the relatively high cost.